Vetiver is famous all over the Indian Subcontinent. People may not understand it since many of them are unfamiliar with this name. Instead, it is popularly known as “Khus” or “Khus-Khus” and it is extensively used in perfumes, food, and beverage industries.

This grass has a very pleasant, mild, earthy, and musky smell which has a cooling effect on the body and the mind. The dried grass and its roots are used to thatch the side panels of the water-based room and window coolers since it cools and adds fragrance to the moist air.

Vetiver Oil is very popular in aromatherapy and has many medicinal properties, which are described in greater detail below.

The soothing and cooling effects of this essential oil calm and pacify all sorts of inflammation. It is particularly good at providing relief from inflammation in both the circulatory and nervous system. It is also found to be an appropriate treatment for inflammation caused by sunstroke, dehydration, and loo, which is the name given to very hot and dry winds prevalent during summer in the dry South Asian regions.

Cicatrisant agents are substances that speed up the eradication or disappearance of scars and other marks on the skin. It also promotes the growth of new tissues in the affected places which replace the dead and discolored tissues and helps achieve a uniform look. This is also useful for post-delivery stretch marks for pregnant women, fat cracks, after spots left by pox, and burns.

In tropical countries like India and its neighbors, microbes and bacteria grow very fast due to the favorable hot and humid climates found in these regions. It becomes obvious that your wounds are most likely to get sepsis in these places since there are plenty of bacteria located in. However, Mother Nature is very kind and has provided the remedies as well.

One such rmedy is vetiver oil. This oil efficiently stops the growth of Staphylococcus Aureus, the bacteria responsible for causing sepsis and eliminates them. It is totally safe for this oil to be applied externally on the wounds or taken orally in order to protect wounds as well as internal organs from sepsis.

Mixed in sorbets and beverages as a flavoring agent, this oil has an aphrodisiac effect. It also enhances the libido and arouses feelings of sexual desire. Since sex has more to do with the psychology of the brain than the physiology, it is a remedy for most sexual disorders like frigidity, lack of libido, and impotence. Certain components of this oil stimulate those portions of the brain, thereby bringing an end to your bedroom problems.

Acts As A Tonic:

The effect of a tonic on the body is quite similar to that of overhauling and servicing on vehicles. A tonic tones up every system of the body, namely the digestive, respiratory, circulatory, excretory, immune, endocrine, and nervous systems. Therefore, in a nutshell, vetiver oil keeps the metabolic system in order, rejuvenates the body, gives strength and boosts immune function.

A tonic for the nerves is called a nervine, like the pure oil of vetiver. It takes care of the nerves and maintains their good health. It also heals the damage done to the nerves by shock, fear, and stress. Furthermore, it helps get rid of nervous disorders, afflictions, epileptic and hysteric attacks, nervous and neurotic disorders such as Parkinson’s Disease, and lack of control over limbs and spasms.

The oil of vetiver is a well-known sedative. It sedates nervous irritations, afflictions, convulsions and emotional outbursts such as anger, anxiety, epileptic and hysteric attacks, restlessness, and nervousness. It even benefits patients that suffer from insomnia.

This property of vetiver oil helps heal wounds by promoting the growth of new tissues in wounded places and also by keeping it safe from infections by inhibiting the growth of microbes. Finally, it also promotes the accumulation of leucocytes and platelets at that location. 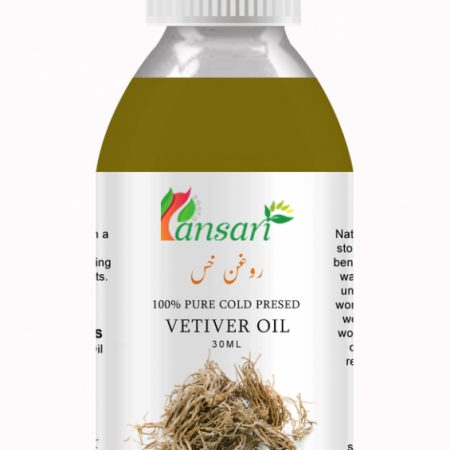