To gain success in the efforts of life the role of a strong mind is far more important than that of a strong body. The worries and problems of the modern age have greatly increased the importance of a healthy and strong mind. Physicians of the past have suggested that some diseases are caused only due to the fact that proper attention was not paid to mental health. These diseases include headache, cerebral debility, dizziness, amnesia, mania or melancholia. The modern medical research has not only affirmed the truth of the theory formed by the physicians of the past but has also emphasized its importance.

Action: In the modern age, the weakness of mind is a common complaint, the main reason thereof being that we provide food to the body for its nourishment but do not care for the nutrition of mind. As a result the mind gradually becomes weak. Qarshi R & D, after having studied all kinds of mental weaknesses in detail, has drawn up the formula of Demaghi for providing energy to mind. Demaghi is quick in producing the desired results. Qarshi clinics have been using it for the last 75 years. It is popular with the people as well as with the physicians. The ingredients of Demaghi provide energy to the mind and nerves, improve memory, relieve mental exhaustion and provide freshness to the mind. Demaghi is the best tonic for the persons involved in the intellectual pursuits especially the students, journalists, lawyers and scholars. It refreshes the mind and sharpens the memory. In the view of the challenges of the modern age the regular use of Demaghi has become inevitable so that the mind may perform its functions properly and stay in good health.

Side Effects: No side effects reported.

Dosage: 5 grams (half a teaspoonful) twice a dy before meals or as directed by the physicians.

Country of Origin: Product of Pakistan

Be the first to review “Qarshi Demaghi” Cancel reply 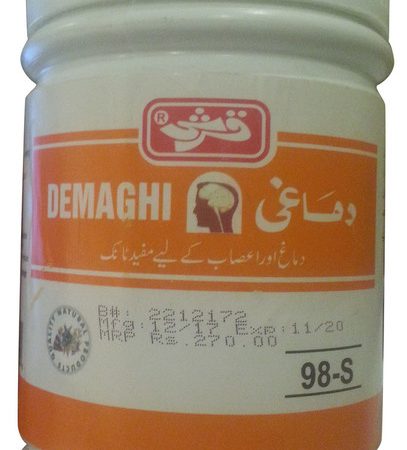