There are numerous types of Snakeroot/Asrol (اسرول) throughout the world, with varying properties, but most of the fundamental benefits are the same. Indian snakeroot has been used in traditional medicine for the better part of two millennia, and has been historically linked to ancient Rome, Persia, China, and India. Although it is native to the Asian continent, its powerful effects have made it popular in the west, but with other varieties more accessible in the Americas, Indian snakeroot is most commonly found in the East. scientifically it is known as Rauwolfia Serpentina.

The part of Indian snakeroot that is used, as the name implies, is the root, which can be chewed, dried, powdered, and consumed in that way. Chewing is the most traditional form of consumption and is still widely practiced. Some of the important health benefits of Indian snakeroot are,

It can be toxic when consumed in large quantities. Side effects of excessive use, can range from mild to serious and include nasal congestion, stomach cramps, diarrhea, nausea, vomiting, loss of appetite, drowsiness, convulsions, Parkinson’s-like symptoms, and coma. Indian snakeroot can slow reaction times and should not be used when driving or operating heavy machinery.

People suffering from stomach ulcers, intestinal ulcers, or ulcerative colitis should avoid the use of Indian snakeroot.

Be the first to review “Snake Root (Asrol)” Cancel reply 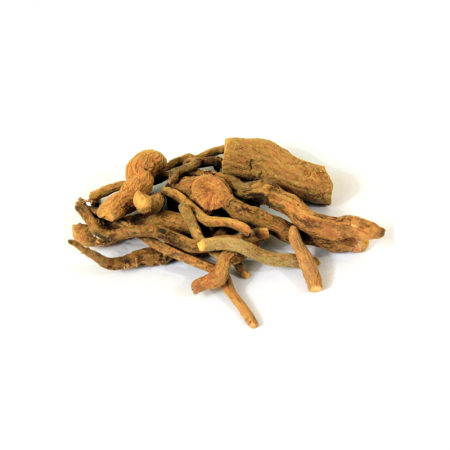